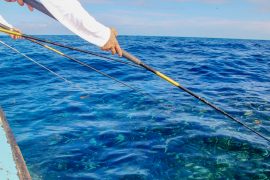 Summer’s end is in sight! The last few months have been hot, so get ready to endure one more scorcher for August. However, once temperatures begin to cool down after this month, you can expect a change in migratory patterns. So, to take advantage of one last month of the summer heat here’s what you can look forward to catching off the coast of Key West.

That’s right, it’s finally here: the end to tarpon season! Tarpons have treated us well for the past few months, but the largest schools of Tarpon will begin migrating away from the Keys. And although Tarpon will still be around after August, this is the last time to take advantage of their larger numbers. For the best location for Tarpon, cruise on down the backcountry.

… And Hello to Yellowtails 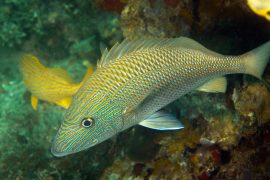 Although Tarpons are now less frequent, other fish begin to make their appearance in preparation for the cooler months of fall. One such fish, the Yellowtail Snappers, become more abundant in the backcountry, around reefs and near wrecks. Other fish for these areas includes Jacks, Permit, Mutton Snapper, Barracudas and more.

If there were ever a spot teeming with fish during August, it’d be off the flats of the Keys. Two fish you’ll be reeling in the most of are Permit and Bonefish. The hot sun warms the waters of the flats and makes the conditions perfect for these two fish to make an appearance. Additionally, Bonefish and Permit make excellent catches if you’re looking for more of a challenge pulling them in.

Mahi Mahi While You Can

Speaking of warmer water, Mahi Mahi can’t get enough of it. For this reason, you’re looking at one of the last months where Mahi Mahi are easy pickings. On clear, sunny days, Mahi Mahi tend to show up on our offshore and deep-sea fishing trips. However, once the weather starts to cool down, so too will Mahi Mahi fishing. While out in the deep, also look out for Wahoo, Sword Fish and Marlin.

Coming Off a Hot Streak 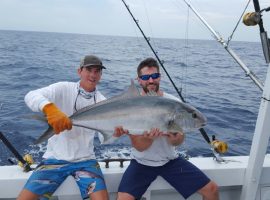 Don’t let August pass you by if you want to take advantage of summer fishing one last time, before next year. And if looking for the best spots around Key West to throw a line in, ask Captain Moe to help.

Captain Moe’s Lucky Fleet is the most experienced fishing charter for Key West and throughout the Keys. Moe himself has sailed the oceans of the world and has even fished a few of them too! When you’re out fishing with Captain Moe, you can expect the fishing trip of a lifetime.