As the holidays are fast approaching, the fish off the coast of Key West keep biting! Captain Moe’s Lucky Fleet understands fish don’t take a holiday break, and some of the best fishing can be done in the final month of the year. During this time, be on the lookout for permit, barracudas, sharks, tarpon, snapper, tuna, wahoo and more.

Casting off the Reef 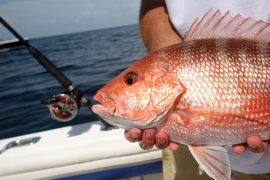 The reefs off the coast are just as popular to fish as any other time of the year. When casting your line out, expect to pull in blackfin tuna, sailfish, snapper, and mackerel. With the sheer volume of fish in these areas, you can reel in large amounts at a decent pace. Using topwater bait will get you the best results.

You’ll be catching a lot more barracuda and permit while fishing over a flat. These fish tend to prefer the shallower water when it begins to cool. And once you catch a few, you can throw them back in as bait to snag some sharks. You’ll find some of the best shark fishing right near these flats.

Plenty to Find in Backcountry 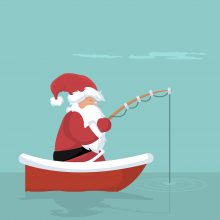 There are plenty of species of fish that make their home in the backcountry during the colder months. With baitfish being consistently flushed into this area, bigger fish like sea trout, jacks, snapper, mackerel and more have little reason to leave. The fishing here is easy, and you’ll be pulling in a good number of fishes over the course of the day.

Fish of the Deep

Big-game fishing is still lucrative during December. Keep an eye out for full moons, when wahoo and sailfish are the most active. Some of this fishing is so great, different fishing tournaments tend to be held during this time of year. Fish in these catch-and-release tourneys are snagged so fast, they never get onto the boat!

Reel Em’ In with Captain Moe

You can trust Captain Moe and his Lucky Fleet to help you pull in fish during the month of December. For more than 30 years, Captain Moe has been sailing the oceans of the world. He’s served in the Coast Guard, professionally competed in ocean racing and fished just about everywhere you can think of. By fishing with Captain Moe’s Lucky Fleet, you’ll have the most experienced captain in Key West helping you deep-sea fish, light tackle fish, wreck fish and more.