June offshore fishing in Key West can be quite exciting because the hunt for weed lines, frigate birds diving on bait, and lots of debris that hold entire eco system that bring the large pelagic fish up to eat.  Once you have located one of these golden finds–Mahi Mahi, Wahoo, Blue Marlin, Triple Tails, Skip Jack Tuna and a wide variety of other species, they can be caught using different kinds of methods. 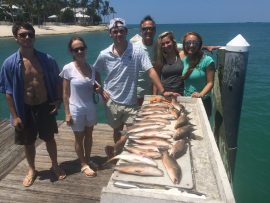 The most common is trolling the weed lines using ballyhoo, if you are fortunate enough to get a school of fish up behind the boat stopping and chumming, while casting, can produce one of the most chaotic and rewarding times of your life. Deep jigging can produce large Wahoos and a variety of other species of fish that will fill the cooler. Don’t be surprised if while throwing Schoolie Mahi back that a large Marlin just might be eating your fish, so be ready with some large tackle to handle the big ones.

If big game is what you want, then this is the time of year to break out the 80’s and the artificial lures and put out a spread to attract big blue Marlin. They love to work the ledges and sea mounts where the upwelling creates a funnel of bait that the gulf stream brings to our area this time of year. We at the Lucky Fleet like to drop baits down on theses sea mounts and catch Snowy Groupers, Rose Fish, Golden Tile and a variety of other deep dwellers that are a great table fare. 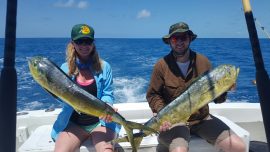 The backcountry boats are busy this time of year not more than 5 to 10 minutes away from the dock catching Tarpon, Sharks, Snappers, and Barracudas. These fish have found their way into the harbor many years ago when the harbor was full of shrimpers. After cleaning their catch, they would shovel the by catch overboard and attract these fish and train them to eat creating a migratory path strait through the Key West Harbor. We use the same type method and have great success catching numbers of Tarpon, plenty of sharks and lots of snappers.