As the land teems with rejuvenated life and flowers begin to bloom, the waters off the Keys are as alive as ever! The spring season stays intense during May, as more and more fish are continually migrating through the warming waters of the area. Now’s your chance to catch the MOTHER of all fish this Mother’s Day while out fishing with Captain Moe!

Yes, can you believe it? Tarpon are crazy active for the third month in a row! Truthfully, as the waters begin to warm is when Tarpon begin to migrate back and thrive. If you want to take advantage of these fish, take a charter out to the backcountry or flats. Additionally, the backcountry holds Sharks, Cobia, Trout and more. And if you’re looking for Tarpon in the flats, you can also reel in some Bonefish, Permit and Barracudas.

As of May 1st, Grouper season has officially begun! Now’s the time to head towards the reefs and cast a line out for Red Grouper, Black Grouper and Yellow Grouper. And while you’re out there, you can reel in additional Snappers, Mackerel and Jacks. Trailing behind the shrimp boats, you’ll even find some Blackfin Tunas.

Out in the Deep

Deep sea fishing offers some great opportunities as well, as the wind begins to die down during May. With calmer waters come some of the larger Mahi-Mahi. These monster Mahi-Mahi, otherwise referred to as “Slammers,” are in peak demand right before the summer hits. Also, expect to see decent numbers of Wahoo and Tuna when out in the deeper water. 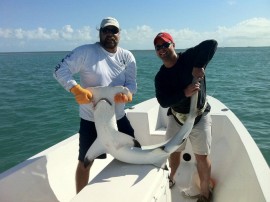 No Better Time of Year

Right between the showers of April and the beginning of hotter temperatures in June, May is the month to be out on the water. Some of the best fishing comes from the transitions between seasons, and spring to summer is certainly no exception. But, instead of dreaming about the amazing fish you could be pulling in, make it a reality with Captain Moe’s Lucky Fleet!

Captain Moe has been sailing the oceans of the world for the last 30 years. From serving in the Coast Guard to being a professional ocean racer, Moe has seen (and fished in) the waters off of New Zealand, Panama, Hawaii, Mexico, the Caribbean, Cuba, Bermuda and every spot in between. In 2000, Captain Moe brought his expertise to Key West and began his Lucky Fleet.